I had a lot of fun this year searching for grasshoppers and crickets, it's amazing just how many there are, even in a small space near the garage I found four, one of them being the Blue Winged Grasshopper, Trimerotropis cyaneipennis.

The Blue Winged Grasshopper owes its name to the bright blue hind wings, which can only be seen when the grasshopper is in flight. The hind wings that are used in flight, fold like a Japanese fan, accordion-like, when not in use, concealed beneath the tegmina. The grasshopper is most common in rugged mountainous terrain, and cryptic when resting among rocks. Besides the blue wings, they can be identified in part by the bright blue shin segment of the hind leg. They don't actually fly, but can glide several metres, and they are incredibly beautiful in flight, much more like a butterfly than a grasshopper. I never have been able to photograph one in flight. 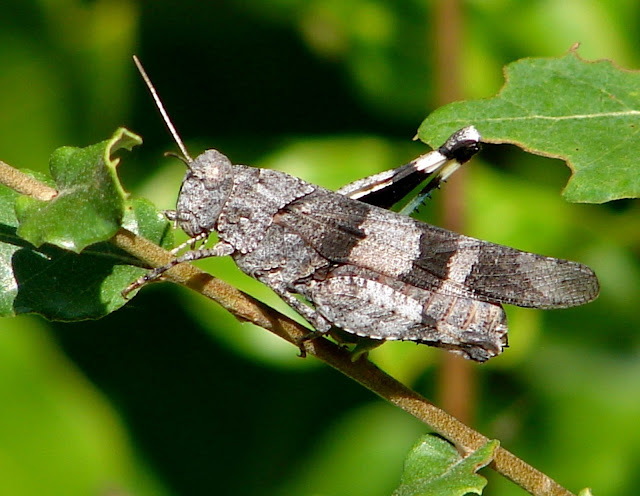 You can see a little of the blue shin segment in this and the next image. 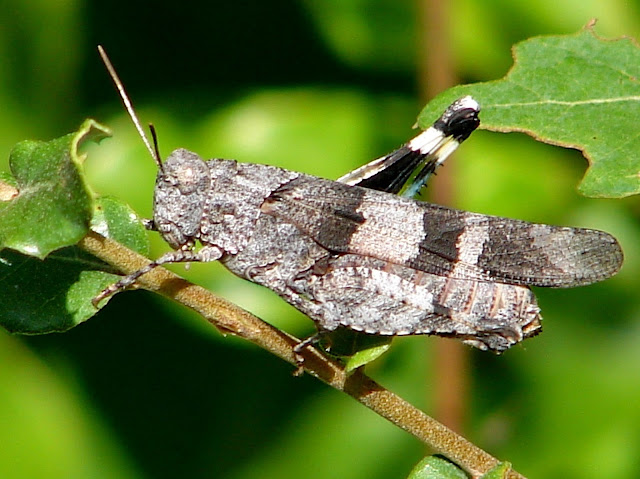 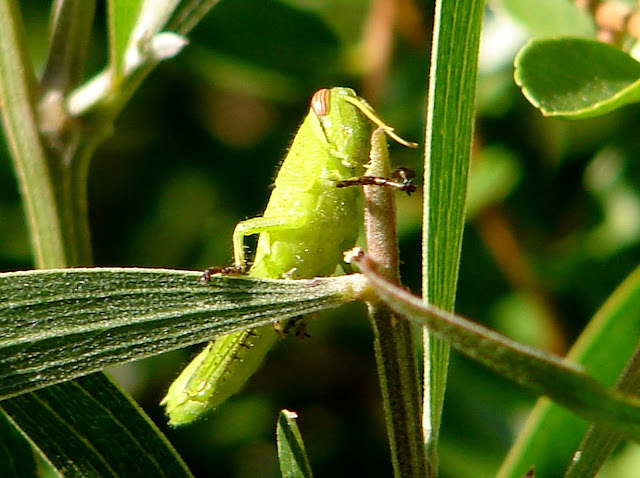 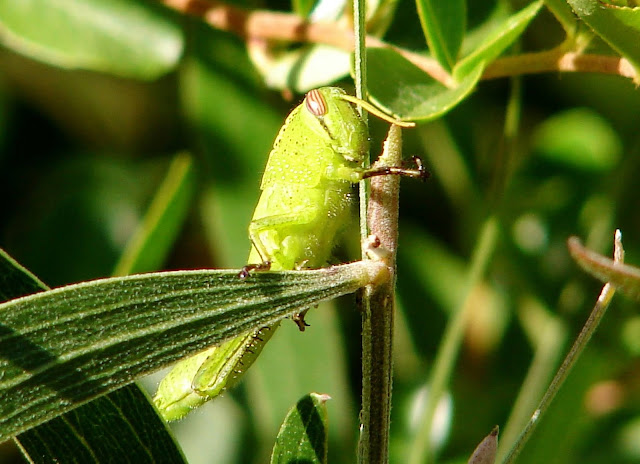 It doesn't look at all like the adult, but the vertical striped eyes are the same 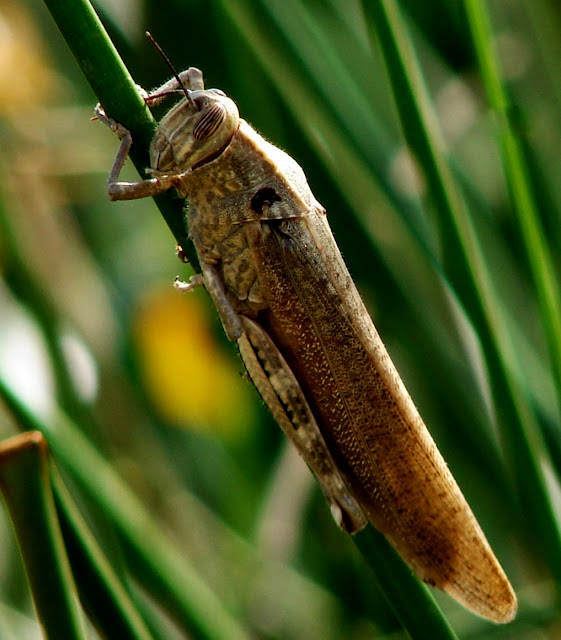 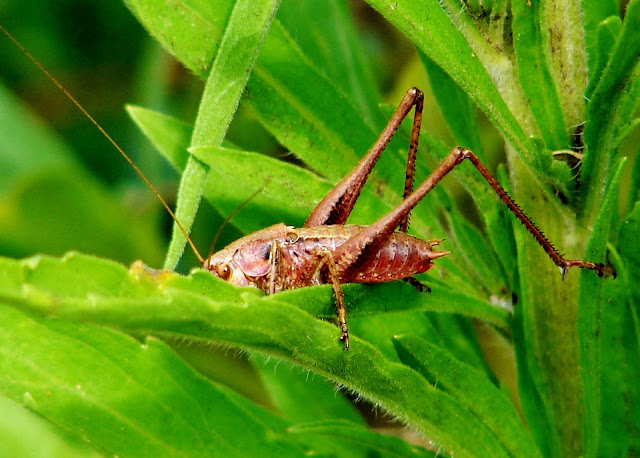 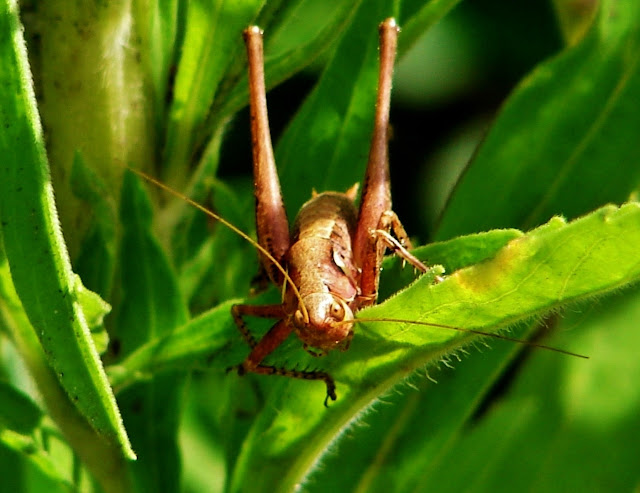 They are usually browner in colour, but surprisingly this one was red. 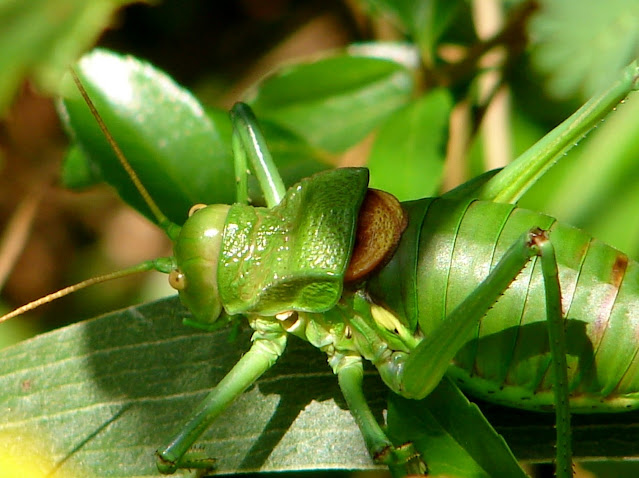 Side and back view of an extremely large Great Green Bush Cricket. 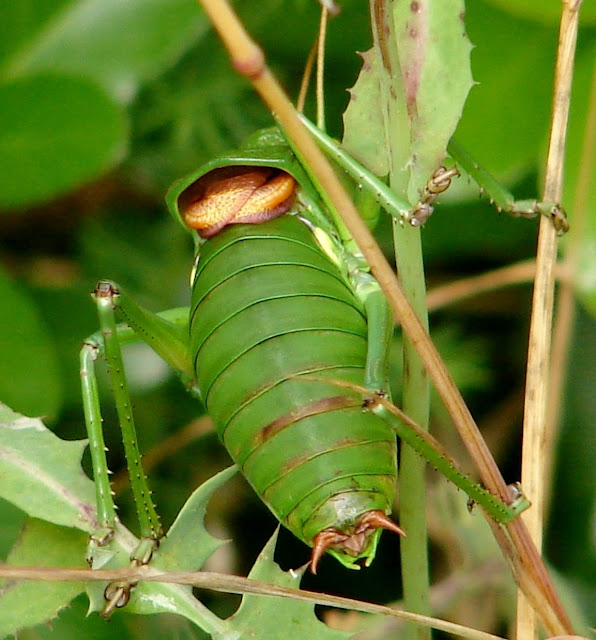 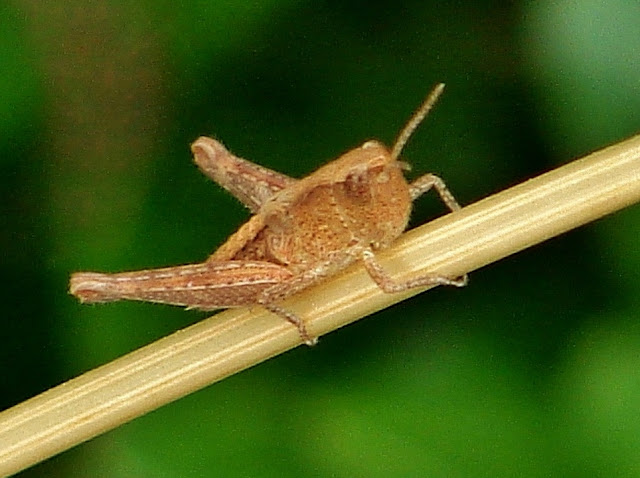 Extremely small grasshopper, which I have found hard to ID, and also the subsequent images. 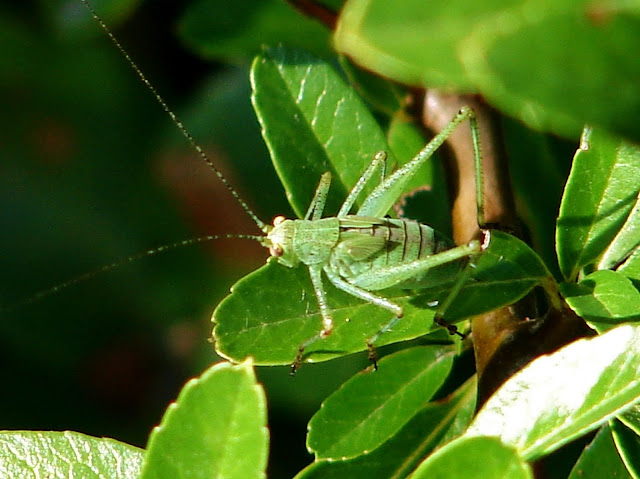 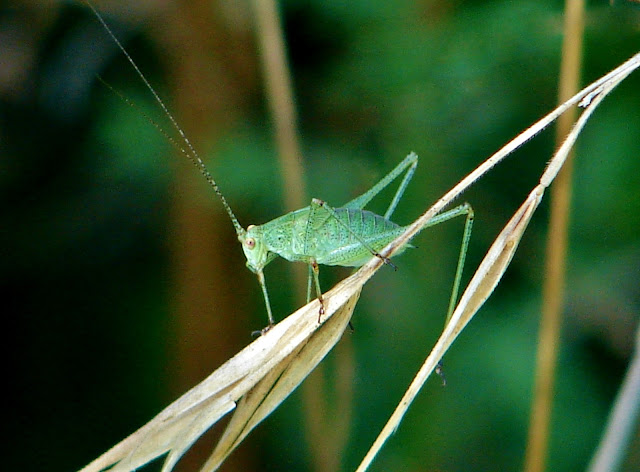 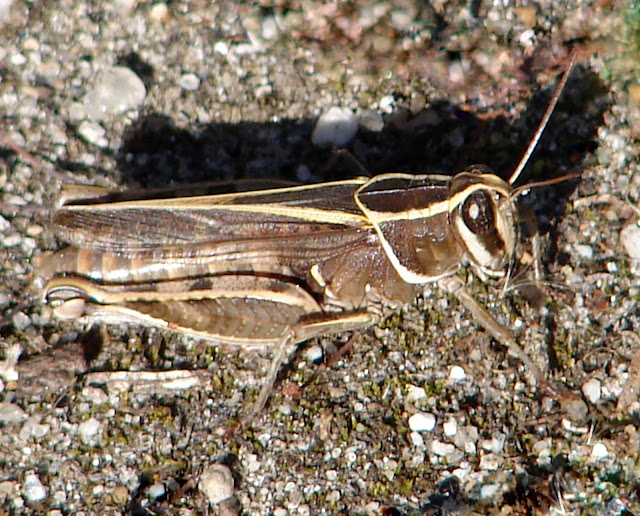 Another grasshopper, and all these insects were found in the garden and on the farm. With time I hope to find out all their names. 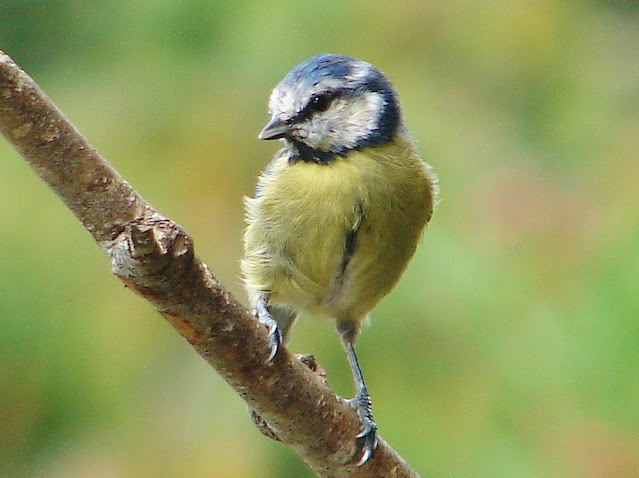 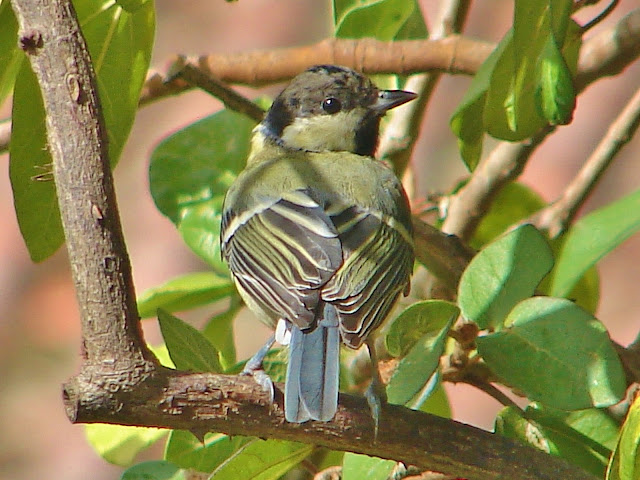 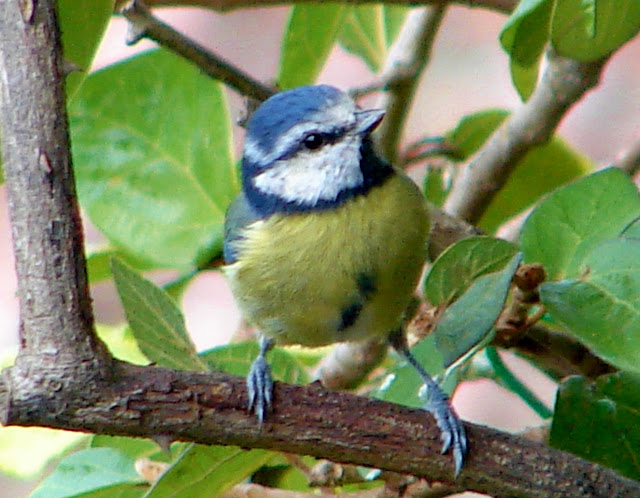 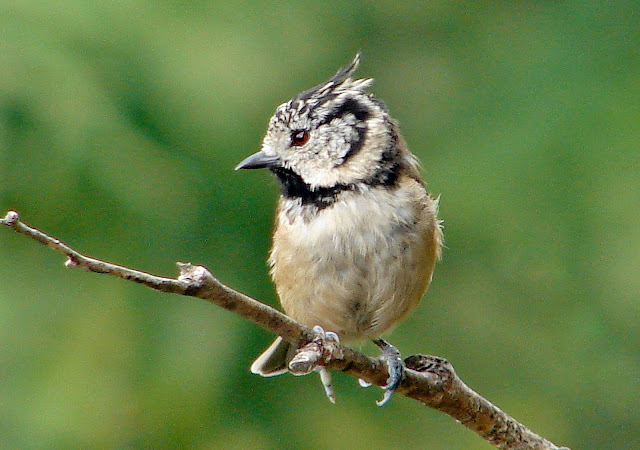 Finishing with some balcony birds.
Posted by Breathtaking at 11:59

A captivating post, Sonjia, with terrific photographs. I too find grasshoppers fascinating creatures, well deserving of our attention, with incredible diversity. I think that for many they conjure up plagues like those described in ancient references, but of course this rarely occurs. Of all the birds you present regularly I am sure that both the Blue Tit and Crested Tit capture the hearts of everyone. I would love to see either one of them again. Hugs - David

I just love your cute balcon birds, I would love to have all or any of them outside our home.
the crickets and grasshoppers are awesome photos. they are so intereseting, all of them.

Wow. Awesome crickets and grasshoppers. It would be nice to see these insects someday.

Grasshoppers are beautiful insects, and so are your photographs of them. The Blue Tit is so pretty, and it's one of my favorite birds in the garden.

All the best to you!

beautiful photos of insects and birds....

Have a great day

Another wonderful series! So enjoyable! Thank you :)

Love your balcony birds. Great shots of the grasshoppers and the crickets. I hear crickets in my garage every night talking to each other. They actually answer each other. Pretty comical

Thank you for the beautiful shots of grasshoppers, crickets and birds.

What beautiful photos of the insects.
But as a bird watcher I think the birds are the most beautiful and photos 14 and 17 are my favorite the blue tit and the crested tit.
Greetings Irma

All beautiful photos. I find the crickets and grasshoppers really interesting.

Those sweet balcony birds live on those fascinating insects. How wonderful that you have taken these great pictures

Greetings, Sonjia. I have really enjoyed your super images of the grasshoppers and crickets. I know little about the various that we have in UK but always enjoy trying to photograph them, although this year I have found it not easy.

I am still very envious of your Crested Tits. It is a long while since I last saw one.

Those are terrific photos of your crickets and grasshoppers Sonjia. Made all the more appealing to me because I am pretty sure we in the North of England have few if any with which to compare. I remember seeing something very much like the Egyptian Locust in Menorca. This is a branch of Citizen Science that you clearly enjoy and also excel in your appreciation and desire to further your knowledge.

You've got some great captures of the grasshoppers and crickets.
Always enjoyable to see your balcony birds.

Enjoy the remainder of September, the year is passing by so quickly.

Superb macro shots of the insects. I enjoyed the bird pics too.

Your grasshopper and our Carolina grasshopper (Dissosteira carolina) look amazingly similar, so I had to look at the taxon and found that they are sort of like cousins, at least in the same Subfamily Oedipodinae of Band-winged Grasshoppers. Close enough for me! And Trimerotropis cyaneipennis is in the southwestern US, also! I found a photo of the wings and they are beautiful. Crickets! They are so difficult for me to find and then photograph. But a friend captured a ground cricket and I finally got one. They are so oddly constructed! Thank you.


Wishing you good health, laughter and love in your days,

I think it's hard to ID grasshoppers but you did a great job! Love all of your photos this week...everything is especially colorful!

Wow, LOVED to see all gorgeous critters & thank you SO much for your comment; Lots of Love Miyako

Enjoyed the balcony birds!!!
I wonder how you can get such detailed insect images...for me, they move all too quickly. You definitely have the "magic touch"!

Enjoy the week ahead & thanks for linking in this week

...you have soon fabulous images. By now I should be seeing grasshoppers, but I haven't. Thanks for your visit, enjoy your week.

Wonderful macro shots of the small critters. It is a pleasure to see them up close. Enjoy your day!

Awesome shots of the insects, and I love that last little bird.

the first grasshopper seems to be covered with clay. Probably a good way to hide itself :)
The large green one seems to be similar to one we have in Sweden :)
Nice post!

Such a fabulous collection of critters! Lovely to see.

Pretty birds!
Excellent photos of the grasshoppers and crickets! The small ones might be the immature forms of the adults. Young ones and adults do not always look the same.
Thanks for your comment on my blog!
Have a wonderful week!

Hello Sonjia,
Awesome shots of the grasshoppers. I do not see them often, or they are hiding from me. I love the cute balcony birds, they are adorable. I was away on a trip and now catching up on my blog visits. Thanks so much for linking up and sharing your post. I enjoyed your critter photos. Take care, have a great new week. PS, I appreciate your comments on my blog.

I loved this post Sonjiia . Of course your birds are beautiful as always, and I am fascinated this time by your photos of the grasshoppers, cricket and locusts. They are a beautiful reminder that there is always something interesting to find in nature if only we look! Not only interesting, but also something new to learn, and (in your photos especially) something beautiful!

Thank you for sharing -- and for the motivation you have given me to try harder to look for the less obvious beauty!!

Grasshoppers are so prehistoric!