The gnarled tree I shared on my Nuthatch post was just one  of many misshapen trees in the park, so I had the idea of going back with the express purpose of photographing more, and just trees, because I saw some very interesting ones when we were there last. On our way there, the sky darkened and it began to look like rain. I had never seen the park in this light before, nor had it ever seemed so quiet. Where had all the birds gone, I wondered! 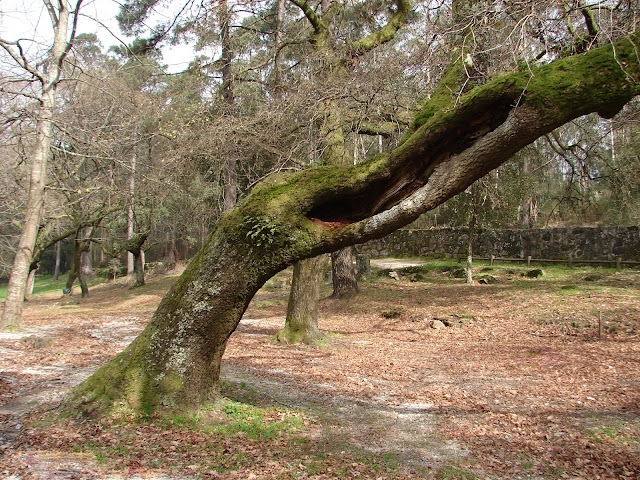 It did seem strange without hearing birdsong, but the trees had been my objective, and there would be another time for birds. I photographed this one first, it's also in the background in my third photo. 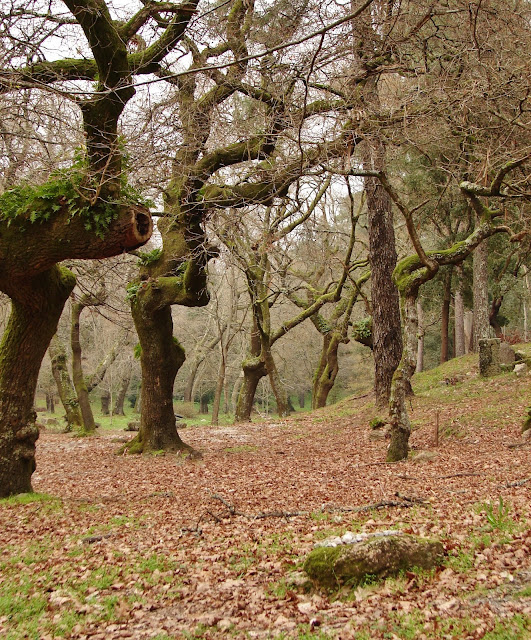 The twisted limbs and tangled branches take on an eerie, almost mystical appearance in this light. 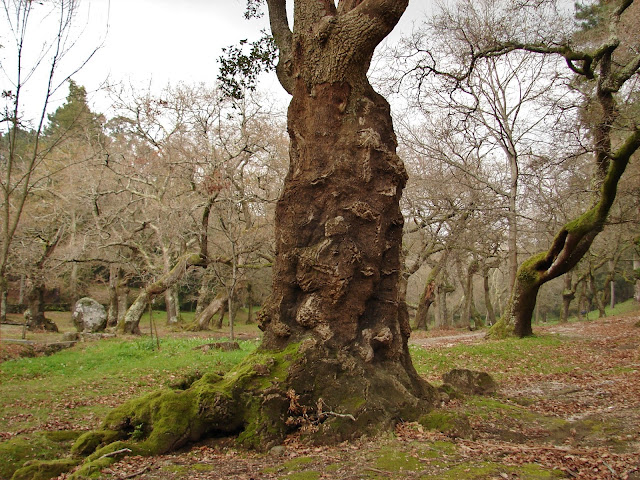 This wonderful tree is rather special, with it's gnarled trunk and moss covered roots. Far from showing weakness, it's weather-beaten appearance shows it's strength as well as it's longivity. 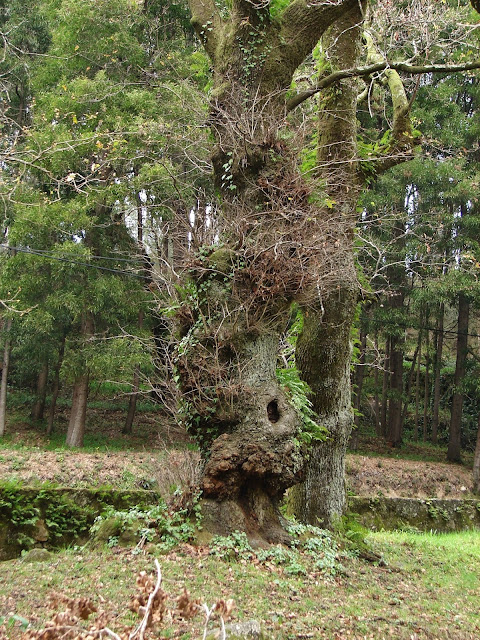 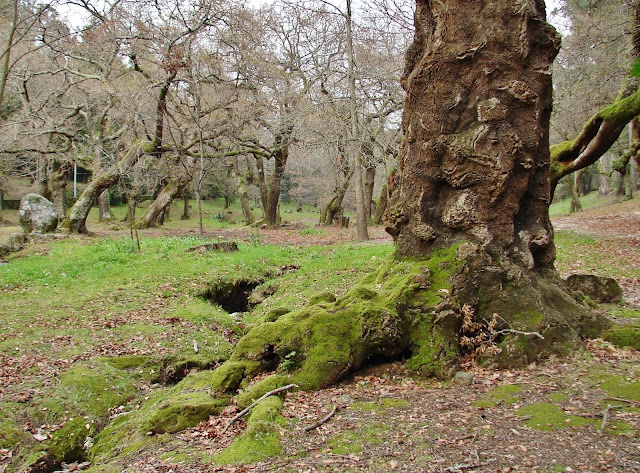 The same tree, just from a slightly different position. It's strong and mighty ancient knobbled trunk and green gnarled roots, made me think of myths and legends, and it's perhaps my favourite tree in the park. 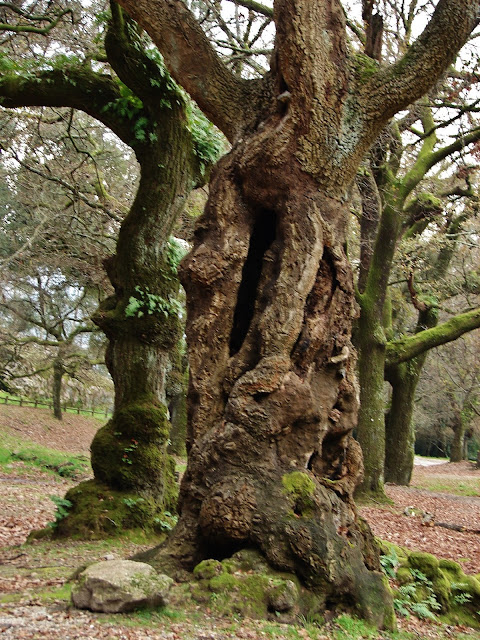 Gnarled trunks and roots, and bent and twisted limbs are in evidence everywhere in the park... 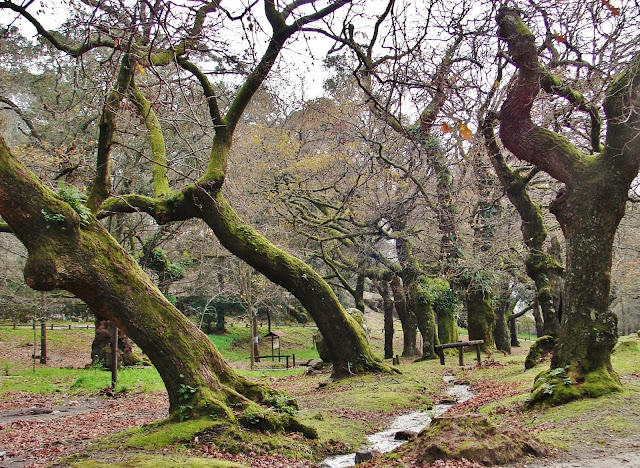 and moss and ivy covered trees, many of which look as though they have been blown over to one side. 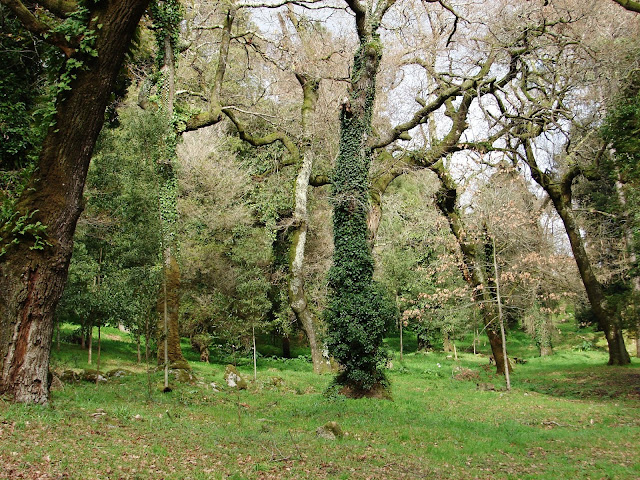 The deeper one goes into the wooded areas the more ivy is apparent covering the  whole of the tree. 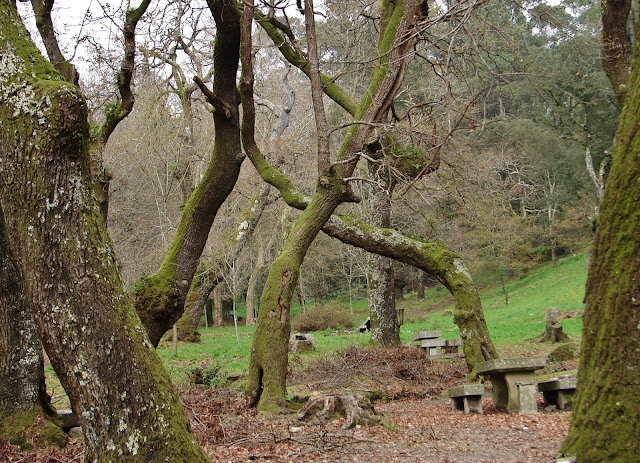 It's hard to believe how they lean and bend, and twist and corkskrew their way upwards and sideways, but although they show signs of distress, they are deeply rooted, and magnificently steadfast. 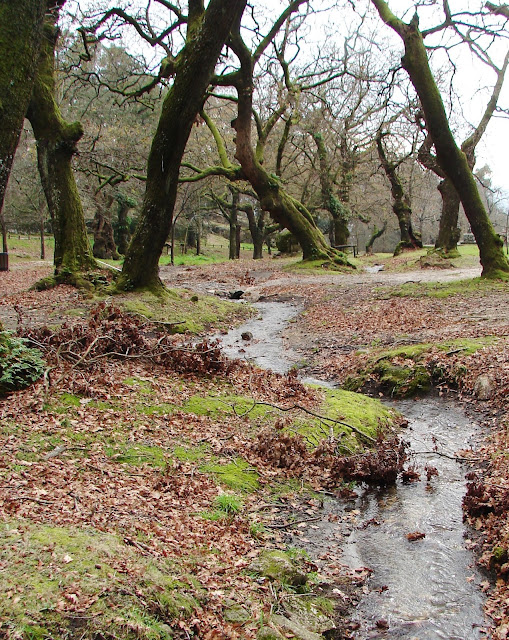 Many slender branches and twigs litter the ground but that is what I like about this natural environment. 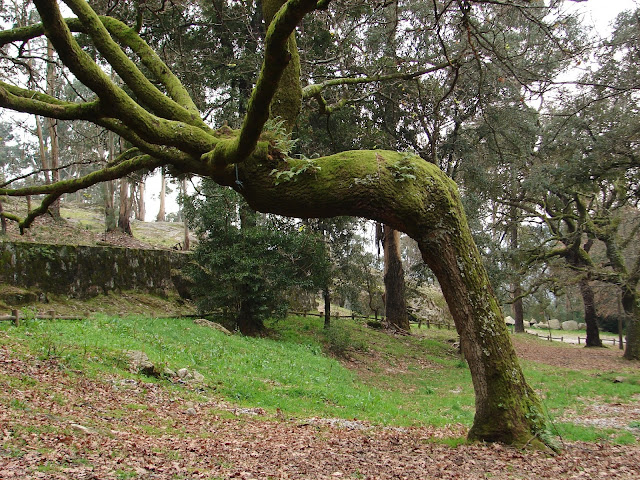 they have been here for a very long time. This is a strange looking tree, being thicker in the middle than at the base of the trunk, and the branches also weirdly misshapen, rather like the tenticles of an octopus. 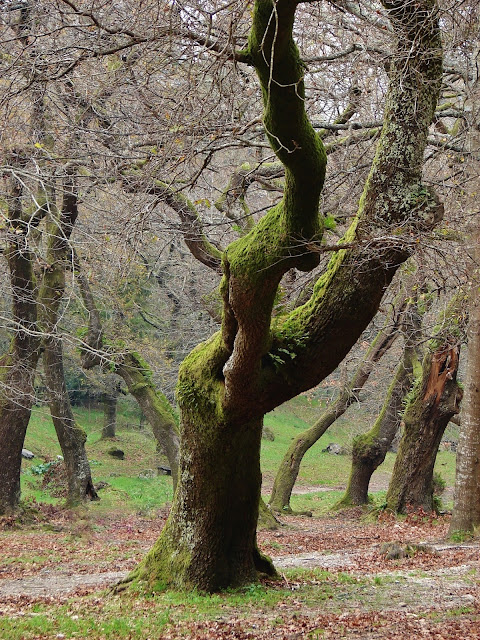 This scene for some reason captured my imagination and reminds me of a magical enchanted wood, 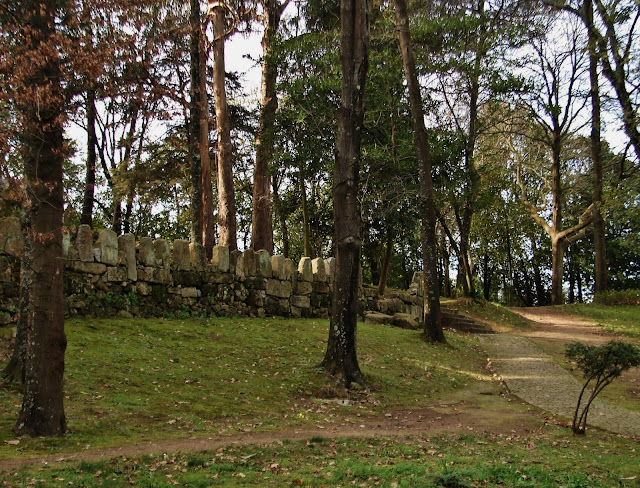 I am including the last two photos, but they were taken in a different park, where the trees grow straight and tall. 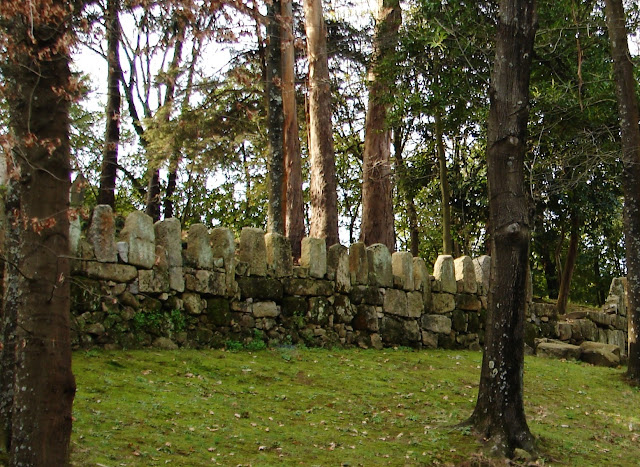 It's Good Fences again, where you can see gates, railings, and fences from different parts of the world and if you would like to participate, just click on the link.  My thanks to Theresa our gracious host for her Good Fences meme.
I'm also linking to Naturefootstep's trees n bushes meme.
Posted by Breathtaking at 10:31

Good morning and what an enchanted forest you have led us through! That was a journey of mythical quality!
The trees seem almost ready to spring to life! If it were any darker, I'd be scared!!!
But truly a wonderful series!
Have a lovely day!

What a gorgeous area. The moss on the gnarled trunks....beautiful.

Hello, I love all these cool looking trees and the pretty moss. They rock walls are lovely too. Beautiful photos. Enjoy your day!

Hi. Mighty stone wall. The trees are magnificent. In the evening, the trees can be pretty scary. Imagination.

Reminds me very much of the live oaks on our Outer Banks.

Oh my goodness, this is just the kind of place I'd love to roam about. What a mystical, magical place this is!

Oh, wait till Tex sees this....oh, they are wonderful. I LOVE them....I came across a pic on Google Earth that had all these gnarly trees and it lives on in memory. But I go look for it every now and then.

The park with the gnarled trees does indeed look like an enchanted forest. I wonder why they are so twisted?
Love the stone fence too.
MB

i love your header shot. amazing trees. i wonder about their ages? hopped over to see your fence. nice to meet you. ( :

I am very glad to join your beautiful blog. Thank you kindly for visiting mine!

Thanks so much for the area where this marvelous place is! I really wish it was closer to where I live, because I'd be there immediately, with a special gnome or two!

Wow those trees are awesome. I agree they do almost seem to be magical in the way they grow and twist like that. - Also enjoyed the cool looking wall in the last two shots, very different and magical in it's own way.

Some of those trees do look rather strange - as if they have been subjected to extremes of weather. It would be interesting to know where geographically the park is situated.- Perhaps at an elevation or close to the coast and subject to extremes? Or maybe its the species of tree that goes that way?

those trees a something else, great work

Oh I so want to visit there and see the fairy trees as my daughter would have called them. Absolutely beautiful. Thank you for making my day smile. Hugs B

This is a really fine series of pictures. They convey that sense of timelessness and permanence that trees have in our landscape - until we cut them down to build another condo that is!

What amazing trees. I love trees with character like that.

I could look at these pictures all day! What wonderful light and those trees are just gorgeous.

I love looking at trees and ways in which they grow. Yours are so interesting, love your photos.

I love those old twisted trees but it would be spooky at night, wouldn't it? Hugs, Diane

LOVE those gnarled trees. So artistic!

Those were wonderful trees in the earlier photos. Like that fence, a different style of fencing.

What wonderful old trees - in most of Australia (semi) regular fires mean we dont get many trees that old.

Are they a variety of oak?

i am a tree lover and a tree hugger!!! these captures are really amazing, like a magical forest!!!!

These trees are so so beautiful.
Lovely photos.....thank you!
Happy weekend!

It might be deformed trees but I find them very photogenic. The trees are beautiful to photograph. They are all impressive to see. I'm glad you went back to photograph these beautiful trees.
Greetings, Helma

Those trees are absolutely wonderful, the way they twist and turn. Beautiful. I love this spot. If I were there I'm sure I'd take a million pictures and if the birds were there too probably two million.

wow, such a bunch of cool trees. You could walk there for ages and still find new shapes and forms.

A perfect post for my Trees n Bushes meme.
Next one is on Tuesday at:
nfmacro.blogspot.com