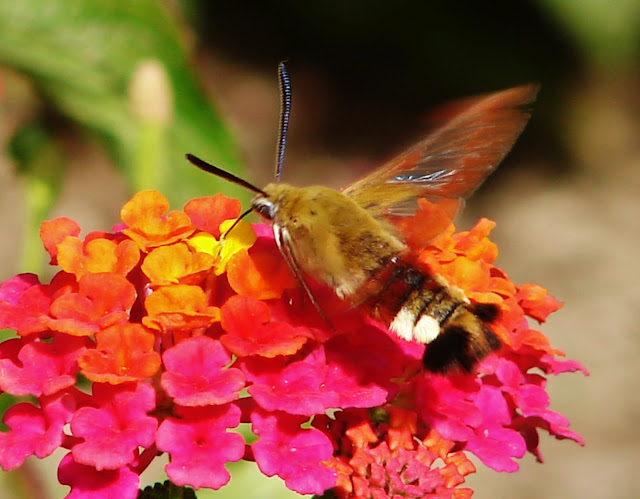 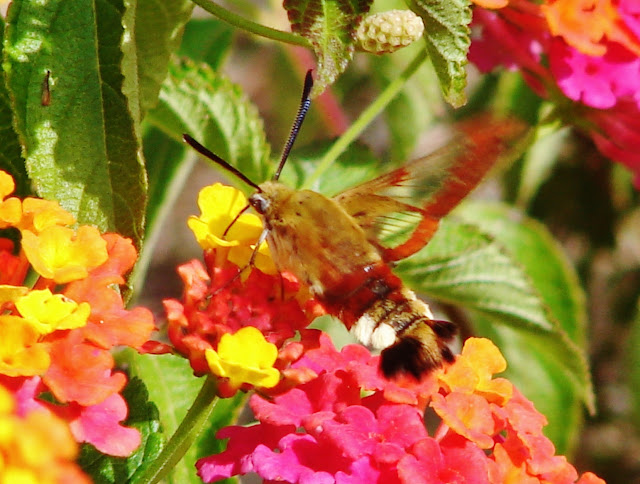 Posted by Breathtaking at 18:32

thank you, always, for your kind visits and comments to my place! i so appreciate them!

You nailed these! I've only ever seen one - so cool.

These moths are soooo coool!!! I've been hoping to see them around here. Some people have found them outside the city....so maybe I'll get lucky one of these days. Your shots are excellent....love the color of the moth against the flowers!

TexWisGirl
Yes they are a strange looking, but colourful and dainty too. I'm so pleased you like the colour in the photos, thank you for saying so.

Visiting you is always a pleasure
Theresa.
Warmest regards.
Sonjia

Hello Giga, nice of you to visit.
Orange wings, and orange flowers, go well together.The insects love the flowers of the Lantana shrub,
albeit it won't have many today, as it's raining heavily.
Beijos.

Ana Mingueze Corella
Thank you Ana,- always so generous
with your comments.How is your little dog? Mine was two yrs old
last week.
Um Abraco.

Ana Hanley
Hi Ana!Nice to hear from you again.
Thank you so much for your lovely comment.
Sonjia.

Tammy
Hi Tammy!
They are interesting little insects
and I remember your fantastic shots of one.Sometimes I only see one all summer.:)

Rohrerbot
Thank you! Yes, they are a colourful little insect, and a welcome visiter to my garden, where they head streight for the Lantana shrub.
See you!!

Susan
Thank you Sue!! It seems like we are back to winter again.Not much chance of taking photos for a while.:(

Sweet
Thank you!!We are lucky to have such bright sun light, which helps.
albeit today it's raining buckets!!

Beautiful moth, I love it.

Bob Bushell
Glad you like it, I love these little creatures too!!:)

Just beautiful, Sonjia. Your photos show them to perfection on the colourful flowers. Such amazing little creatures. I have only been lucky enough to see them in my garden twice (each time before I had a camera) and the first time, some years ago, I could hardly believe my eyes and wasn't sure what I was looking at :-)

ShySongbird
Thank you Jan.I know exactly what you mean.On my first encounter with this beautiful little moth, my reaction was the same as yours.I looked at it almost with disbelief, but instant fascination.

I just had to come for another peek Sonjia :-) The beautiful colours on the flowers and that delightful little creature have brightened yet more miserable, wet and gloomy days here. Remembering how much the ones I saw hovered and were hardly ever still I am amazed you managed such lovely photos, it must have taken a lot of skill and patience!

ShySongbird
How lovely that you came back Jan,
and it's nice of you to say my photos brightened your day.:)

I am not skilled in the art of photography,but I do have plenty of patience, and take lots of photos, as I did with this moth. After that it's just a matter of choosing the best. My love of nature is definately the main reason for taking photographs, but hopefully I can learn something about photography along the way:)

jesters view
Thank you so much, so pleased you like them.:)

Beautiful pictures, but also a wonderful insect. Nice colors together with the flower. Greetings, Joke

Nice photograph, extraordinary face of the nature. I am greeting

Wow, one of my favourite moths!Last year we had quite a few visit Southern England but this Summer I have seen none so its extra nice to look at these.

Joke
Thank you so much!!It is a curious
looking insect,I love watching them
and am always happy to see them in my garden.

Hope you have a nice weekend.
Regards.

ZielonaMila
Thank you! It's an unusual moth,but
one I particularly like.So pleased you like the photos.:)

Hi Jerry!
For many reasons it's one of my favourite moths also.That we get to see them during the day in bright sunlight, is fantastic. I so appreciate their uniqueness in looks and behaviour and it's such a pleasure to see them, albeit I only saw two this year.
So glad you liked the photos.:)

Beautiful shots and colours!
Hope you're having a great weekend.
Mette

Bengts fotoblogg
Thank you!! I loved your playful cat.

These are just excellent.

S Etole
Thank you! I so appreciate your visit.

Hi Stuart!
Yes it is! A not to miss opportunity, when these little
creatures are hovering over the
Lantana shrub.

Thank you for your visit.

Great capture! I'm usually frustrated by flying, flitting critters. I never seem to get them in focus before they are off again.

Marta Z
Thank you! Some of the smaller fast moving creatures can be most
frustrating to photograph.They are
challenging, but also so rewarding
when we finally get what we want.:)

Wild colours wrapped around a very broad pelvic girdle. It must be the Vivien Westwood of the moth world.x

Ianx
Flashy and a little weird perhaps!
Always great fun to get your comments Ian.


These photos are professional. kisses

Brown Eyes
Thank you Brown Eyes.I have missed you, so glad you came to visit.
Kisses right back to you.