Today I would like to show you all the photos I took of  a juvenile Ocelated Lizard , that crawled out from under the hedge only a few cm away from my foot. I felt a movement rather than heard a noise, looked down, and there it was, a beautiful yellowish lizard. All the other ocellated lizards I have seen  previously have been green, so I was delighted to have an opportunity to photograph a yellowish one. 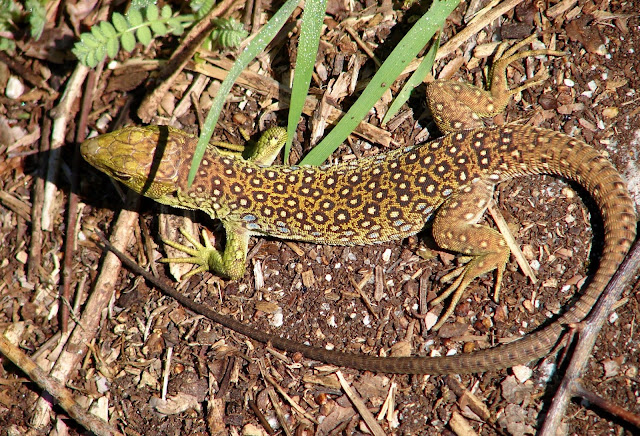 It was on the move, hunting for food, such as spiders, beetles, mainly large insects, berries, and on occasion bird eggs. For an Ocellated Lizard, the largest European Lizard, it looked small and quite skinny. 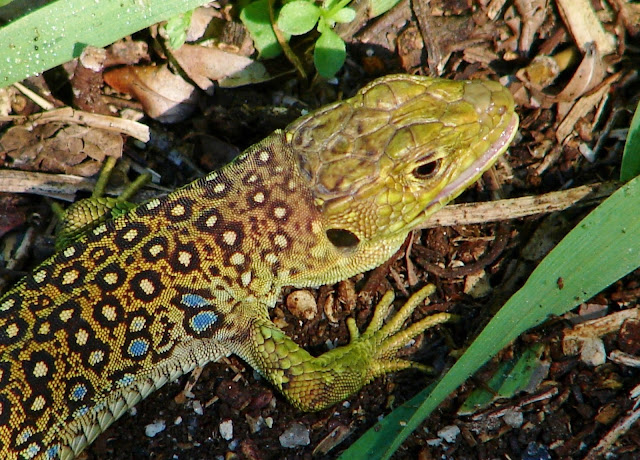 During the winter, it ceases it's activity, hibernating for varying periods of time, depending on climatic conditions. This was possibly it's first hunting trip after a long sleep. It was a lovely sunny day, and food was it's main objective. It was not in the least perturbed by my presents. 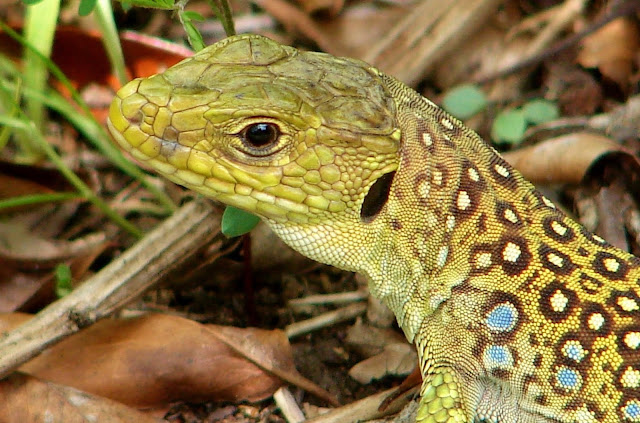 These images were taken in early March, just before the breeding season, which is mid-March,  when  the days get warmer, and sunny, and goes on until mid -July, when the females lay their eggs underground. Juveniles become sexually active by their third year of life 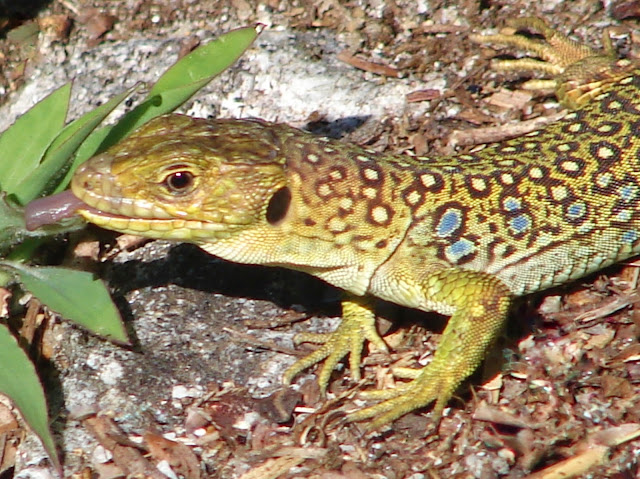 I watched it hunting, catching air born insects, admiring it's colour, and when I returned several days later to photograph insects, I saw it again when it crawled out from under the hedge in the same place. 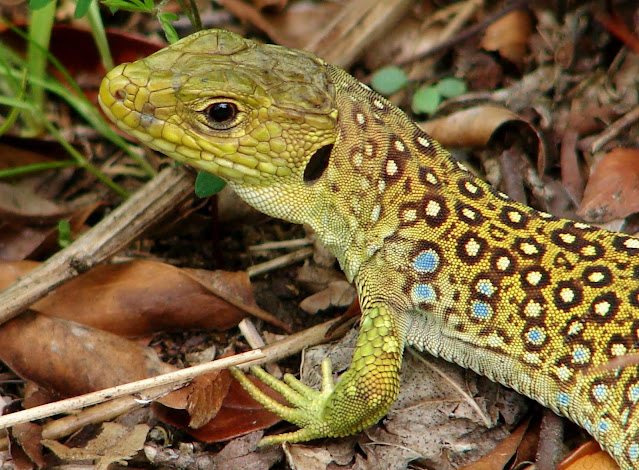 It is difficult to know if it was a male or female, for unless you see them together you would not be able to tell as both look alike, but the male is larger, and has a bigger head. 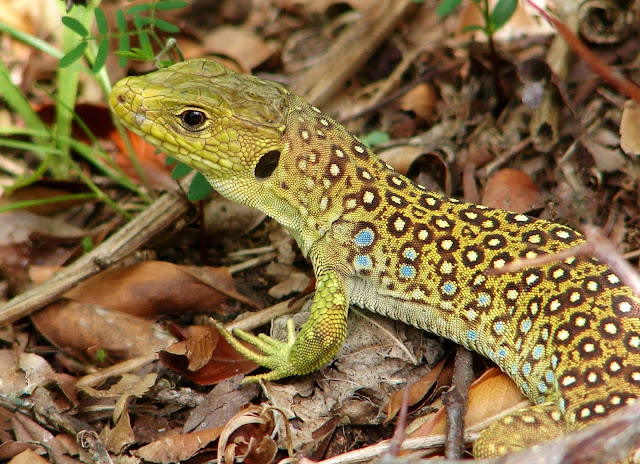 Adults average 40-60 cm in length, but can sometimes reach an impressive 90 cm. Generally two thirds of it's length is taken up by it's thick  tail. I liked the striking ocelli spotted pattern on this juvenile, and the ocelli profusion gives name to the species 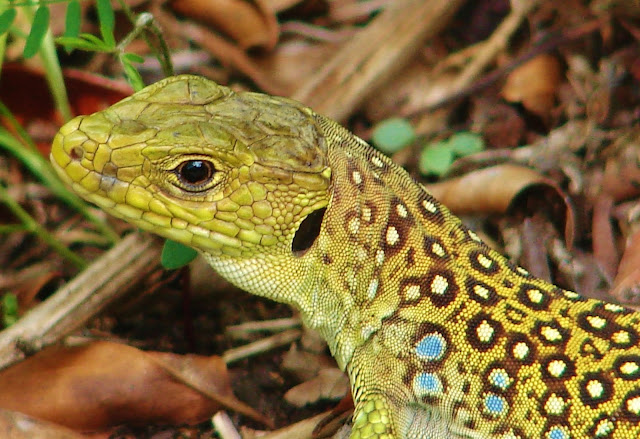 The Ocellated Lizard, or Portuguese Largarta, is a protected Species in Portugal. A lone unsociable lizard, but always a pleasure to see. 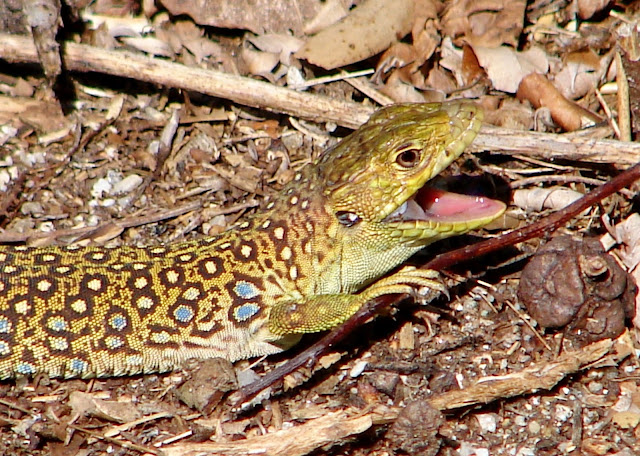 This is my favourite photo!
Posted by Breathtaking at 18:44

Thank you so much for visiting my blog. I have enjoyed my return immensely :) Your photos of the juvenile Ocelated Lizard are fabulous, so sharp and clear, great detail and very interesting.

He/she is stunning and super fantastic shots. I want to see it.. i love all the details in the skin. I think that is what is on my header on madsnapper. I took that photo at Jungle Gardens and can't remember what it was, it was about the 90 cm you mentioned. here us tge link. let me know what you think it is, he was stunning also..... https://snapperone.blogspot.com/

Hello Sonjia,
You certainly have more interesting wildlife where you live than I have. I have good news though the local authorities have acknowledged the decline of the wildlife in Sussex and are going to do something about it. So perhaps things will improve in about 10 years time. I have never seen a newt or lizard in the open spaces near my home in the 6 years I have lived here. Take care.
Mike.

WoW!!! the close ups are so amazing...those spots are cool, some are blue!!

i can feel your enjoyment in taking these pictures!!

It's beautiful, the pattern is really lovely and it must be very exciting to see a protected species doing well - difficult to photograph I would think as they can move fast.

It is a beautiful creature, Sonjia, and your pictures are outstanding. I am quite envious, of course, since we have no lizards of any kind here in southern Ontario - and I wish we did! There are salamanders but they are generally well hidden and one has to turn over rotting logs and the like to find them. They don't just sashay out in front of you the way this fine character did. Enjoy it to the fullest. Best wishes. David

Oh my! You got some great photographs here, I did enjoy seeing them all.
Thank you too for the information about this lizard, an interesting read.

That lizard is simply beautiful. And all of your pictures are superb Sonjia.

Hello Sonjia!
You have taken very beautiful photos of this lizard. It looks quite big. We have a lizard here in Norway too, but it's much smaller. I like the blue pattern on it's back.
Hugs from Norway

Your lizard is so cute, I like the yellow color and it has little blue dots. Very pretty details on this Ocellated lizard. Awesome series of photos.
Thank you for linking up and sharing your post. Take care, have a happy weekend! PS, thanks for the visit and comment.

Incredible!! Your favorite is mine also! Perfect timing.

Reading your blog is like learning about critters, and every time I study about something. And your detailed capture of the lizard also helps understanding its features better besides the information of the lizard. Excellent!
Have a nice weekend

...now this is a critter that I won't see around here. Its makerings are neat. Your favorite is mine too. Enjoy your weekend!

Living in the moment,

He's beautiful in his own way. I needed him to eat the robber fly I saw! heehee! We do see some interesting critters when we slow down and look!

Wow! What a colourful lizard! I really like the last picture too :)
Have a lovely sunday and take care...
Titti

That's quite a lizard, and so beautiful; bigger than any lizard we would see around here. I'm so glad you stopped by my blog and left a comment. Your blog intrigues me, not just for the wonderful photos, but that you are living in Portugal. My father was Portuguese, and his parents grew up somewhere in Portugal, although I'm not sure where. When grandpa was young he traveled to the USA, while one of his sisters went to live in Brazil. Enjoyed this post.

We have the same favorite photo. Really gorgeous lizard.

Hi Sonjia. Sorry for the late visit, but things have been a bit upside-down this week.

These are absolutely wonderful photos of such a beautiful lizard, and an interesting description too. I'd love to see one 'in the wild'. If lizards and snakes were easier to find in my area of UK, I think that they would become of major interest to me, and consume much of my time. However, some years I don't even see one!

Hello there,
many thanks for your comment and question about pumpkins and their seeds on the low carb diabetic.
I have just replied to your question on the blog but thought I'd also give you a helpful link here too.

Yes, you can use the pumpkin seeds, please see here

Enjoy all of your pumpkin(s).

Incredible photos of the lizard, they are absolutely beautiful.

Great shots of the lizard. Have a good week.

Wow! What a beauty. I didn't know such a lizard existed in Europe. It almost looks tropical!