A Red Sqirrel on my Balcony

We have lived in our home for 55 yrs, but during all that time, I never saw a squirrel on my bedroom balcony, until one morning last week. In winter we are often shrouded in a thick  morning mist, but I go to fill my little bird box feeders no matter what kind of  wet weather we are having, I do this before even having my own breakfast, because I like to look outside the windows in our heavy wrought iron doors, and watch the birds come and go, as I'm having my breakfast in bed, a habit of many years. After breakfast, I hide behind the wooden shutters, and try to take photos of the birds, but that morning I took photos of the squirrel. I let it eat, and refilled the boxes for the birds once it had left. 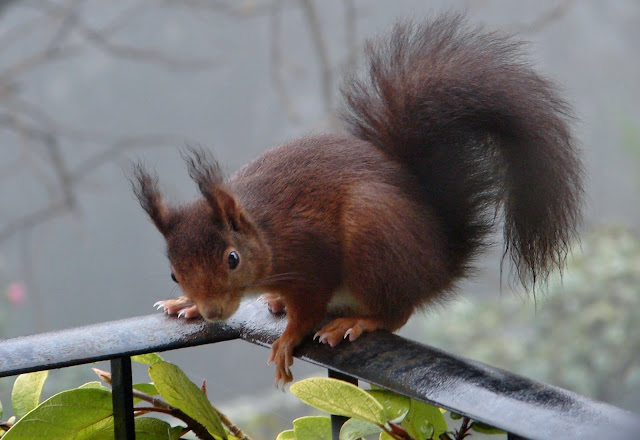 The squirrel arrived here, on the corner of my balcony. 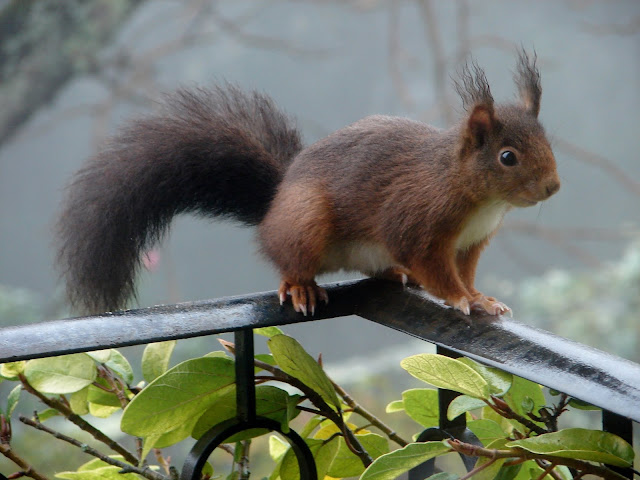 He stayed motionless for a while, weighing up his next move, 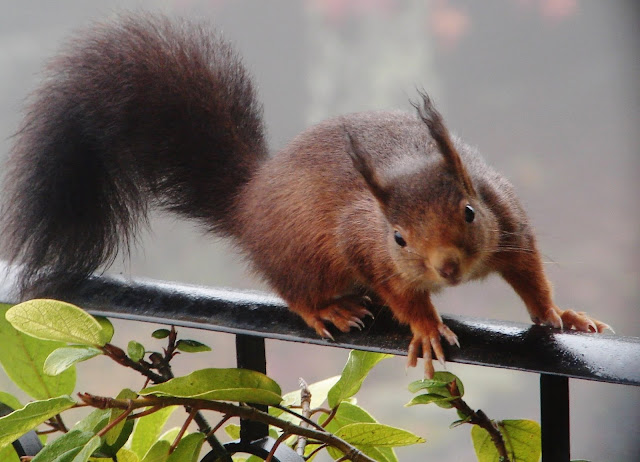 This is where I think he saw me, but he wasn't afraid, and carried on undeterred. 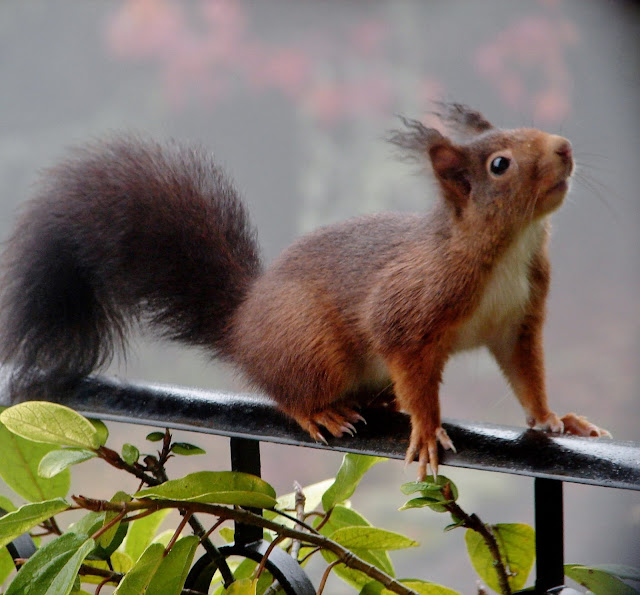 He spotted the feeder here, and  climbed up without any difficulty. 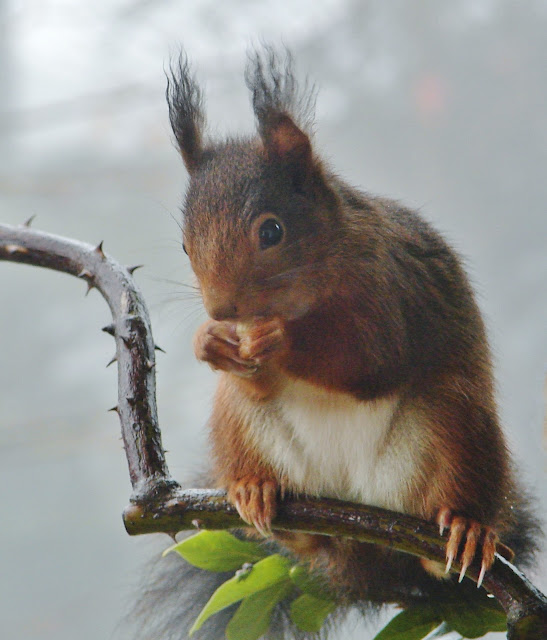 He looks cute with his white underside showing. 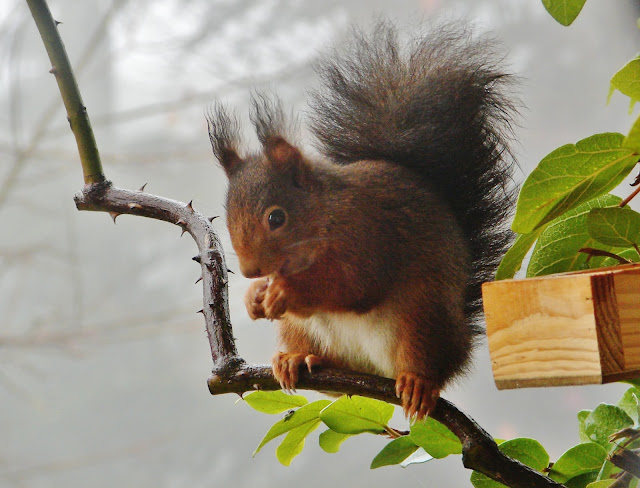 This is what he was looking for, but I don't mind, because he must have been hungry, and it's been raining none stop for days. The squirrel has not returned yet, but I expect he will! 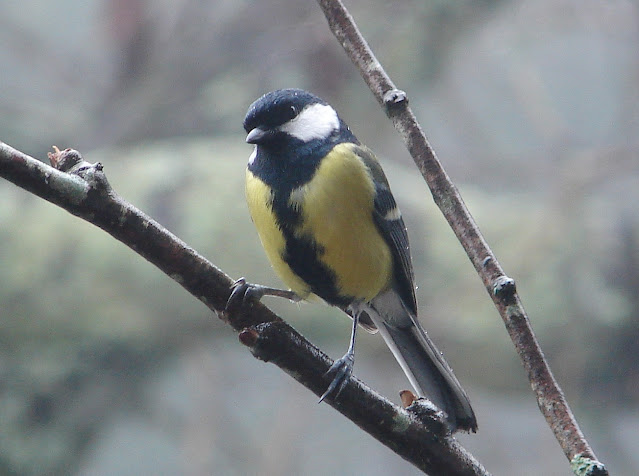 Here are two captures of a Great Tit, taken on the same morning. 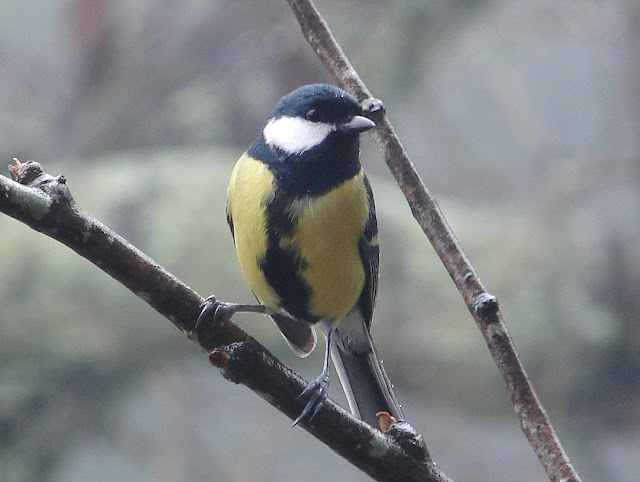 It is the bird I see most often in the garden.There are dozens of them in the thick foliage of the Conifer trees.
Posted by Breathtaking at 19:55

oh my goodness, that squirrel is way too cute for words. we have gray squirrels, the red ones are adorable with those stand-up ears!! the tit is a beauty, looking so inquisitive!!

A darling little squirrel with those tufts on its ears. Lovely bird also. Great photos!

Very beautiful photos! The squirrel visit my garden too, and they are so cute. It's nice that it comes to your balcony. Do you give it some food?
Happy weekend.

Oh my gosh! The sweetest ever squirrel images! And your birds are terrific too.

I love your squirrels. I like the hair in their ears..Our squirrels are gray.. just as cute. That is a bird that we don’t see here.

Delightful! We only have gray squirrels here.

That squirrel is so cute with those crazy little ears we don't have anything on ours ears like that and all of ours are gray but they're really cute and so is this. Love the great tit and your photos are absolutely beautiful and I'm not sure how you take such pretty ones in such low light but they're gorgeous and I would love to sit behind the blinds and watch all of them to

Glad you are moving a bit better.

The color of the squirrel shares the shade of our Indian giant squirrel! You lovely captured the cute actions of the squirrel and nice tit shots. Hope you have a wonderful weekend
Take care

Hello,
Your red squirrel is so cute, adorable photos. I love their cute ears! The Great Tit is a sweet bird. Wonderful post and photos. Thank you for linking up and sharing your post. Take care, enjoy your day and weekend! PS, thank you for the comment on my blog.

Good afternoon dear Sonijia,
What a fantastic suprise that the squirrel came to visit your balcony.
Beautiful photo´s of it and of the great tit.
Have a wonderful weekend
Marijke

I don’t think I’ve ever seen a beautiful squirrel like this before and your photography is amazing!! Lucky you to be able to be so close!!!
Enjoy your day!!!

The Red Squirrel is just beautiful. How lucky you are to have one come and visit. I'm guessing you must have pine trees fairly near to your home. The Red Squirrel is now very rare here in the UK, having been out competed by the non-native Grey.

Wow, it delights me to find your excellent blog thanks to your kind comment on mine. Your photography is wonderful. The squirrel is so cute. And the Great Tit ... excellent captures! I enjoyed reading your profile and how photography has become a joy. We share that desire to have the camera ready to capture a memorable image. I hope to see you again at my blog and I’ll be keeping an eye on yours. Have a great weekend, stay safe, and take care. John

Wonderful, he is a good poser!
We have light brown ones with three black stripes on the back.

Oh! Sonjia, a red squirrel on your balcony and I have to travel several hundred miles and even then I may not find one. Lovely shots.
Stay safe and take care.
Mike.

Those ear tufts are so funny. Beautiful pictures!

What beautiful pictures.
I really love the squirrel.
So much fun that he comes to your balcony to see if there is food to be found.

Those squirrels are so much cuter than the ones we see here! And the bird is beautiful! Great photos! Keep that camera handy!

Ha ha ha...this is a cute squirrel. I like its ears.

What a beauty. Squirrel are so beautiful.

Love the pictures of the squirrel! We have 3 on the bird feeders dayli :-))

Awww that squirrel is just so cute.
Thank you for all the lovely photographs.

I enjoyed seeing the Great Tit too.

My good wishes for this new month of March.
Take care.

Oh your balcony feeder is wonderful, and I love the squirrel action series. He’s very pretty and different from the squirrels I see. But I’m guessing he will now be a regular diner at your balcony cafe ... You will need lots more filler for the feeder )). Your bird is so sweet also. ...thank you for visiting mine... Doubly appreciated since you’ve had troubles commenting. I’m so sorry for that. Once in awhile it seems like TypePad, the platform I use, doesn’t play well with others. They are pretty good about answering concerns though, so I will let them know.

Hello,
It is wonderful you are able to watch the birds and critters from your balcony. The little birds are sweet and I love your squirrel. Great photos. Take care, have a happy weekend!