Algarve and The Bee-eater

Hello everyone!:) Many thanks to one and all, for your much appreciated comments, most of which I saw only moments ago.  Your good wishes for us to have a happy and relaxing holiday were fully realized, because we had a splendid time, full of adventures, and we really did enjoy every minute of each day. If you remember, my quest to find and photograph the Bee-eater, was high on my list of things to do, and photograph a Bee-eater I did, but only at a distance, never the less, it was a mission accomplished, and here are the few shots, I was able to get. 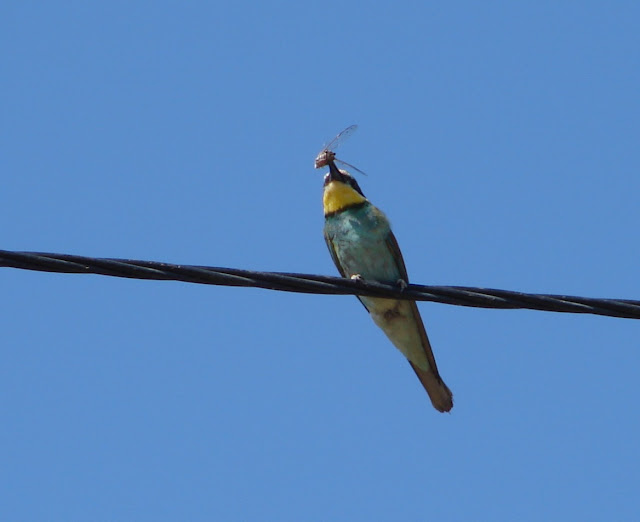 It can eat around 250 bees a day. The impact on bee populations, however, is small as they eat less than 1% of the worker bees in the areas where they live. They nest in colonies in sandy banks, preferably near river shores, usually at the beginning of May. We found their tunnels, with the help of a friendly farmer, but alas they were all disappointingly empty, and  it seemed unlikely that I would see any at this stage. 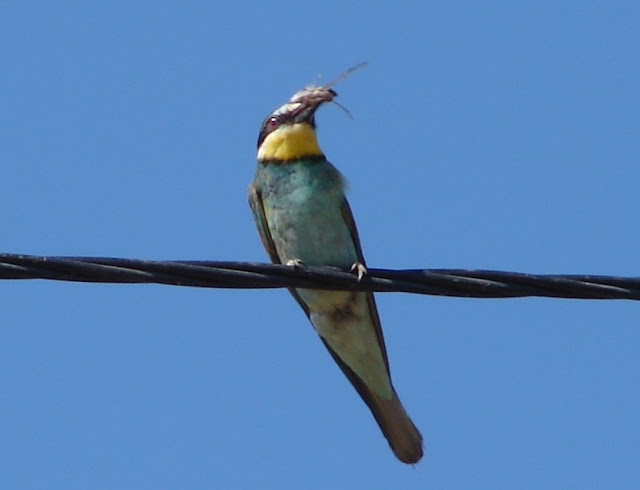 They make a relatively long tunnel, in which they lay five to eight spherical eggs in June. Both male and female care for the eggs, which they brood for about three weeks. They also feed and roost communally. If only Americo and I had been able to leave earlier, we would have seen, so many more bee-eaters, but it was exciting looking for stragglers, and when we did eventually see one, it was a heart stopping moment. 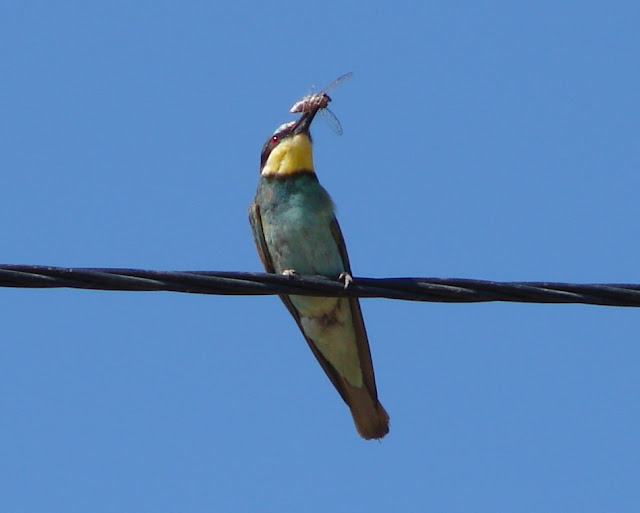 On another day we were on our way to the marshlands by car, when I spotted what I thought looked like a bee-eater sitting on a fence. So Americo stopped the car, and I climbed out to get a clearer shot. We couldn't risk driving nearer in case it took flight, so here are the three captures I managed to  get.

WILD BIRD WEDNESDAYS
SATURDAY'S CRITTERS
I'D RATHER B BIRDIN
GOOD FENCES
Posted by Breathtaking at 09:33

Labels: Algarve and the Bee-eater

Your photos are gorgeous! I am so happy that you had a lovely time! A very warm welcome back!


Hi. What a beautiful bird. Hopefully, sometimes I would see that bird. Stunning photographs.

Beautiful images of the Bee-eater, I love it.

wow! amazing! thanks for sharing and have a great day!

Thank you for your comment. I of couse paid you a visit but found no
comment mode, but if you happen to see this ....I enjoyed your photos, and hope you did do everything you planned for this weekend!:)
Bjs!:)

how awesome to see and photograph them! and lovely to sit on a fence, too! glad you had a good trip!

Beautiful bee eater and I love all those fence photos

Well done in finding and photographing a Bee Eater. I find that they are not an easy species to get close to - very wary normally, like many a bird. Still, that's what makes the challenge of picturing birds?

An interesting bird that you photographed quite well!

The hours you must spend and your seemingly inexhaustable patience truly amazes me!

How beautiful it must be to see this bird. What I read on the birdpage of Holland they are also visiting in the south part of my country. I wonder if the breed there.
Have a wonderful day.

Its a beautiful bird, colourful too. congratulations! Finally you get to photograph a bee-eater bird. Welcome back from your holidays.

These photos are SO amazing Sonjia!!!!! I have learned something new because I never knew these birds existed!!!!! SO interesting! I'm glad you had a good time....you were missed! 💕 I hope to see more and more of your photos!!!

A good decision oreering Britain's Birds. UK and Europe share 95% of birds anyway so most of the book will be useful to you. It is a really great book, super photos and information. You will not be diappointed.

Welcome back! glad you had a good trip & you really did manage to take great photos of the bee-eater! Those shots on the fence are super!
Have a lovely week!

Excellent shots of a bird I am yet to see. You must have enjoyed your trip. Regards Mike

Oh my goodness what a beautiful bird and capturing it with the bee---heart stopping indeed.

Splendid shots of the bee eater. What an interesting looking bird. I have never seen one before except in photos. Thank you for stopping by and leaving such kind comments on my recent posts. I appreciated them very much.

Amazing clarity considering what is in those photos!!!! I will say that size of those bees is a tad scary, don't you think????...:)JP

Most enjoyable. Thank you!

Glad you had a great time! The bee-eaters are so gorgeous! Glad you were able to get such great shots! Really enjoyed them. And loved the info too.

Hello, the Bee-eater is a gorgeous birds. Awesome series of photos. Happy Thursday, enjoy your day!

Great shots of the bird on the fence. Love the blurred background.

I've never heard of this bird but I'm so glad you got to see one and get such amazing photos to share. It has some beautiful coloring. Very neat!

i'm so happy to see that you are back, and that you had a lovely vacation. i have never seen, nor heard of a bee-eater, what a beautiful bird!! gorgeous captures of this colorful bird!!!

What a wonderful presentation. I was not aware of such a bird and I have been around a long time.

Dearest Sonija; Wow, what magnificent photographs pf bee-eater♪ What a shot of his prey on his beak, great capture and happy for you, Dear friend♡♡♡ And also resting on the fence shots are really lovely.

Oh, I'm happy to know we share wonderful husband :-) To tell the truth, I also have hard of hearing. Haha, my poor hubby should be my eyes, ears, fetching things from high place p:-)

Happy to know your great days and welcome back♫♫♫
Sending Lots of Love and Hugs from Japan to my Dear friend in Portugal, xoxo Miyako*

What a delightful bird the Bee-eater is. Loved all your shots. The one's on the fence were super neat to see.

WOW! These are fantastic shots of the Bee Eater

The Bee-eater is a smashing bird, and your pictures are superb.

I think it is always quite a thrill to have the opportunity to observe and photograph these birds, they are truly wonders of nature.
And the pair, bonded for life is so sweet towards one another.
Enjoy your WE :)

These photos are awesome! Have a beautiful day!

Nature offers us the best gifts and you've shared a lovely one, with this sweet feathered friend! Enjoy your day.

What a beautiful bird. I love ALL you surprising photos!

Welcome back!!! How exciting! These birds are so colorful. You probably just missed their fledging period and now they are off into the greater world. But you found several and they are gorgeous. I hope to see some one day. Looks like a wonderful trek!

I love to see the Beeaters, but I have to travel to do it :)

Stunning photos of the Bee Eater. It looks like a reasonable sized bird. Loving it's colours and the background.
Have a wonderful weekend :)

Hello, I would love to see this beautiful bird in person. Gorgeous photos. Happy Saturday, enjoy your weekend!

looking at these again, they are just beautiful captures!! have a happy weekend!!!

Congrats on a successful quest!

They are fantastic birds.
~

Wonderful birds - I remember how excited I got when I saw my first ones - with luck I will see some more next week on a trip to Northern Australia.

These photos are absolutely AMAZING. Such wonderful coloring!!
Extraordinary images...

Welcome back. I hope you are relaxed and contented and ready to renew your blogging activities for us all to enjoy. Bee-eaters are surely one of the most enigmatic of all bird families in the world. I have been fortunate to see many of them and they never cease to amaze and delight.

Here I am again -in the wrong spot but, having wrestled for about 27 years to get into the comments slot for the estury,I now settle for what comes up.

You have some lovely shots of an estuary identical to one very near to my home - the Cuckmere river estuary here in East Sussex. Maybe have a look in Google to see remarkable similarities.